A trailer as unique as an Escape deserves a fitting name. Have you given your Escape a name, either at the factory or after-market? If so, this award is for you. Trailers built/named in late 2021-Present are eligible for this award.

“Sólfar means “Sun Voyager” in Icelandic and our Escape is certainly a Sun Voyager! We went to Iceland for our honeymoon in 2015, and after many, many hours of flying, we landed in Reykjavík, tired and bleary eyed. Sólfar was one of the first things we saw when we arrived and it really spoke to us. We just sat and stared at it for a long time. It was beautiful!  The image on the trailer is my best drawing/representation of the Sólfar statue (it’s a viking ship). I’ve included photos of the sculpture as well as one with me on it to show scale.

It’s time to hitch up the “Caboose”. 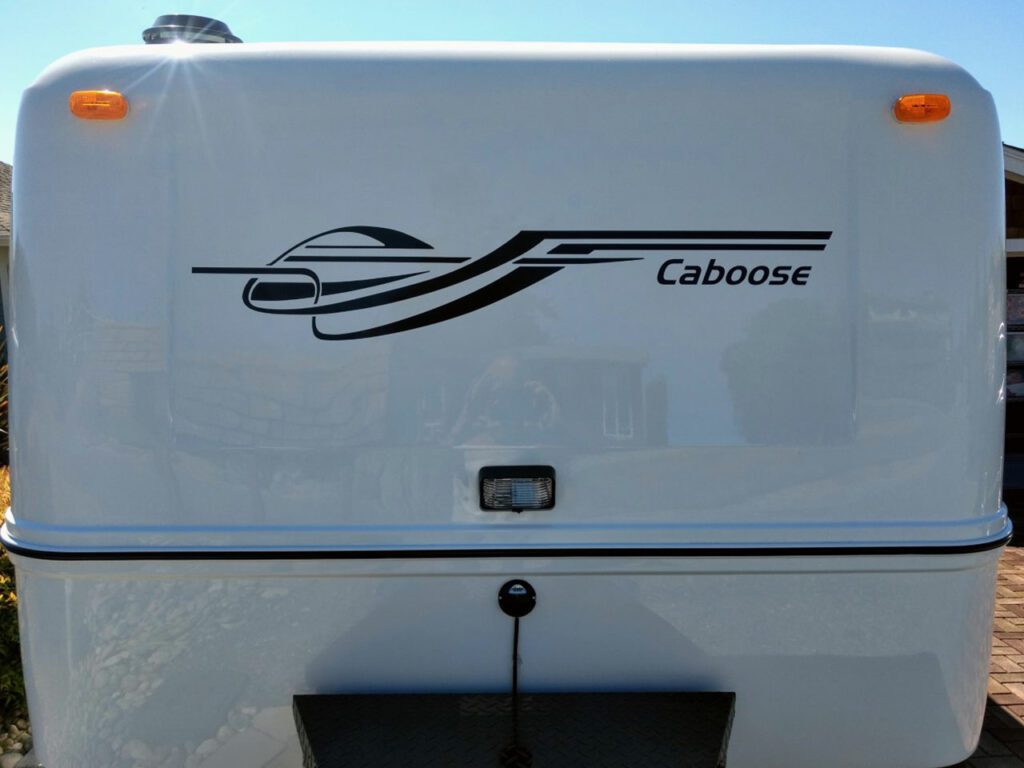 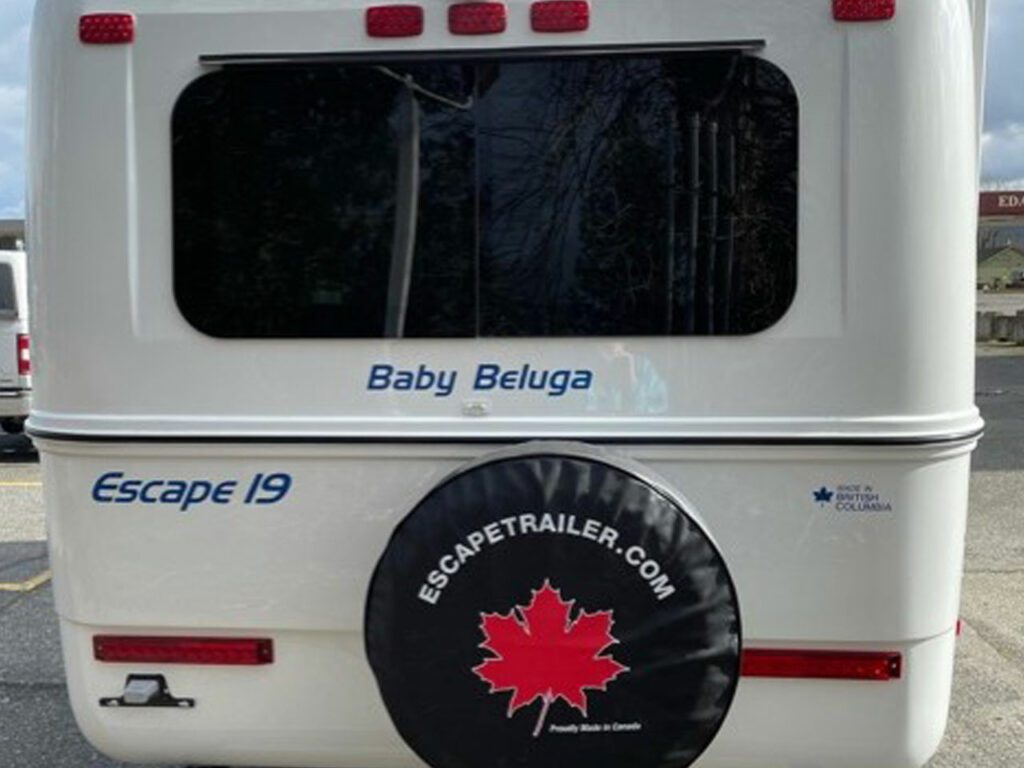 My mother was Laura Louise. She spent most summers car camping 3 little girls across country while my dad flew west to consult. We camped and searched for fossils and gemstones and took trips with the Sierra Club. She was primarily a musician but loved adventure and the outdoors. It is simple, but fitting to name my trailer after a woman long gone from us, but who would have enthusiastically encouraged and been a partner in my travels. 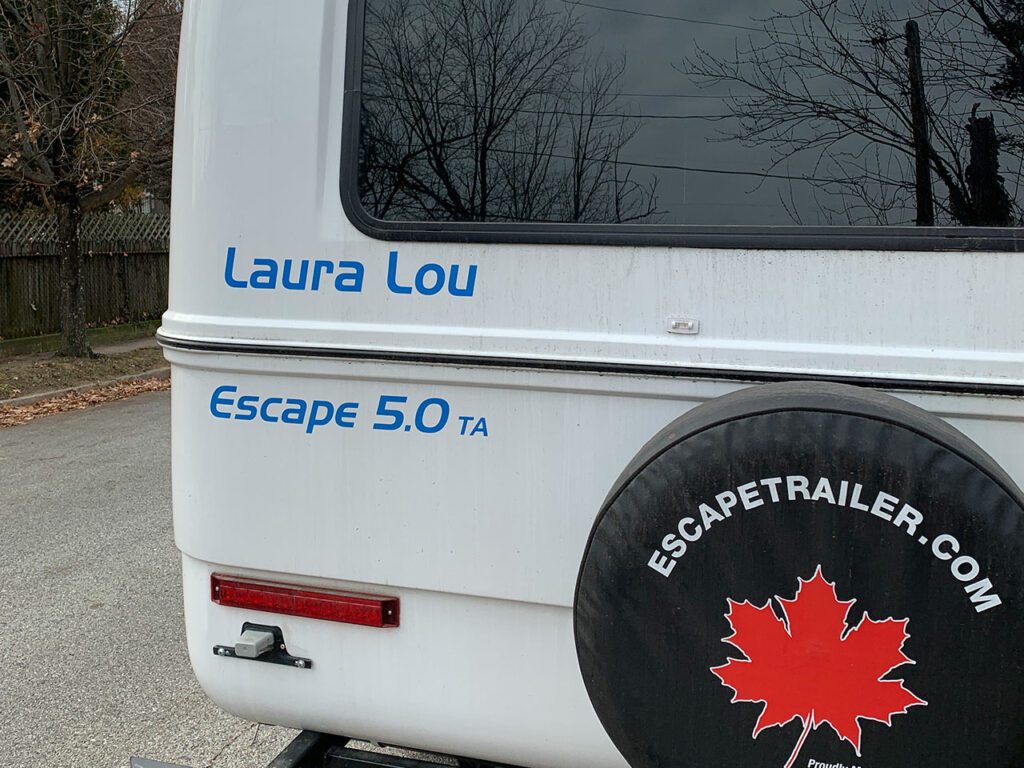 Heading out for a long trip with uncertain destinations, and Chuck Berry and old rock-n-roll fans, seems perfect for us. 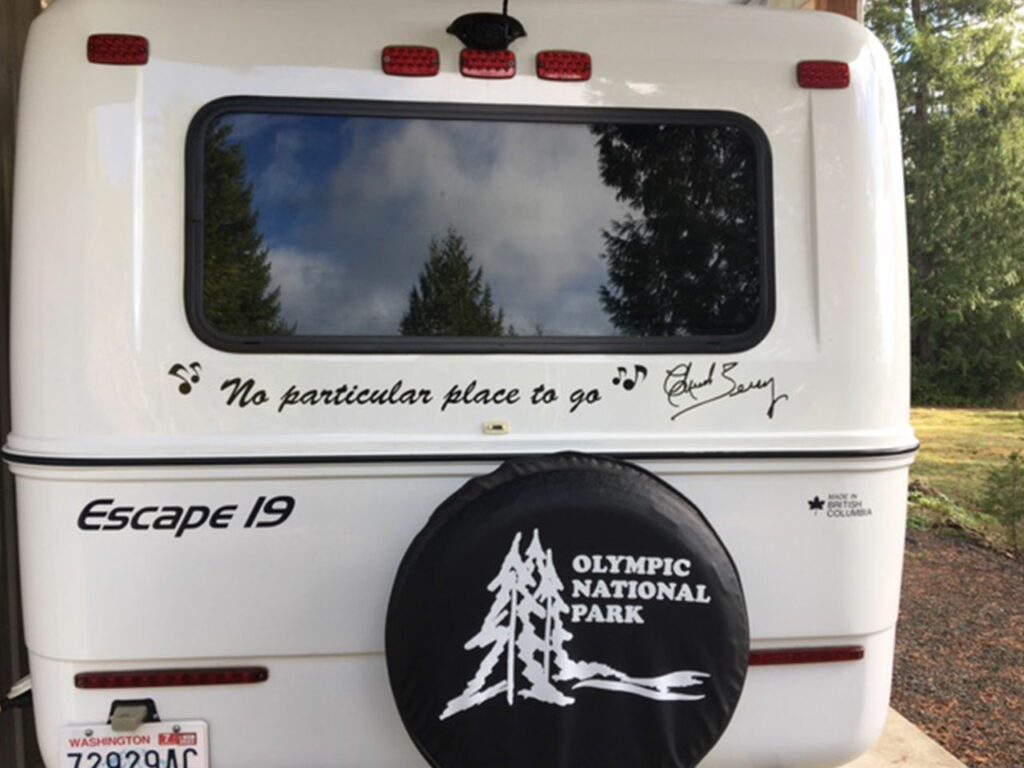 We are retiring from the Nine to Five working life and as we have a brand new Escape Trailer it seemed fitting that we would name our Trailer “Escape 925”.  (Dolly Parton would approve) 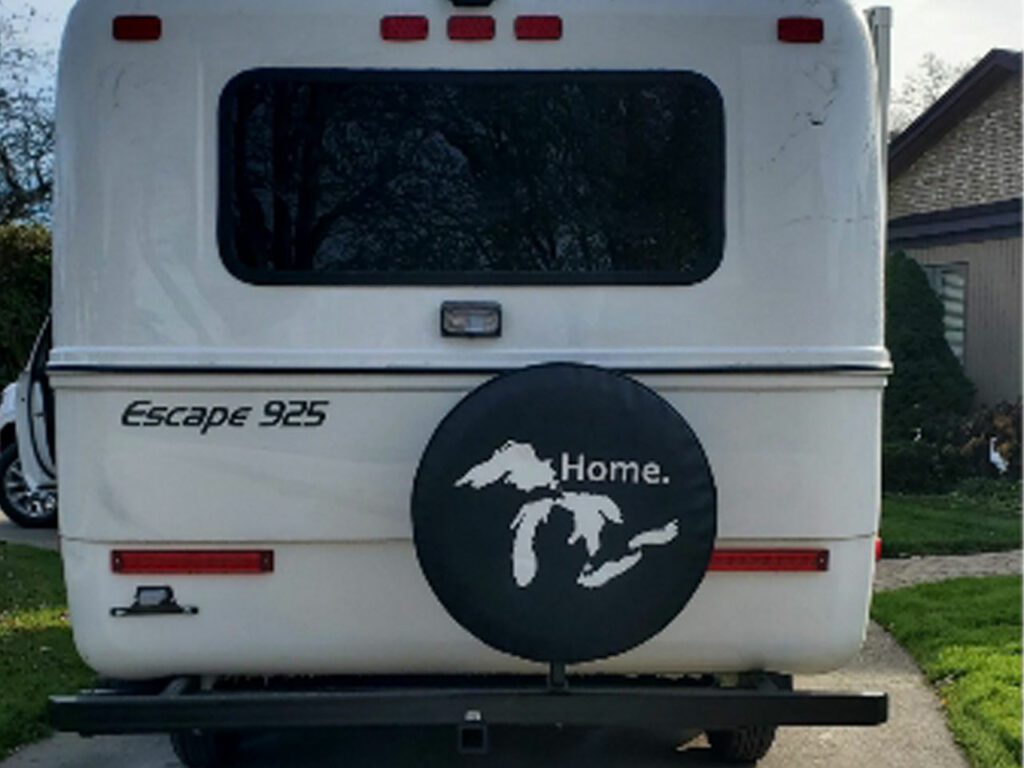 My husband is punny. 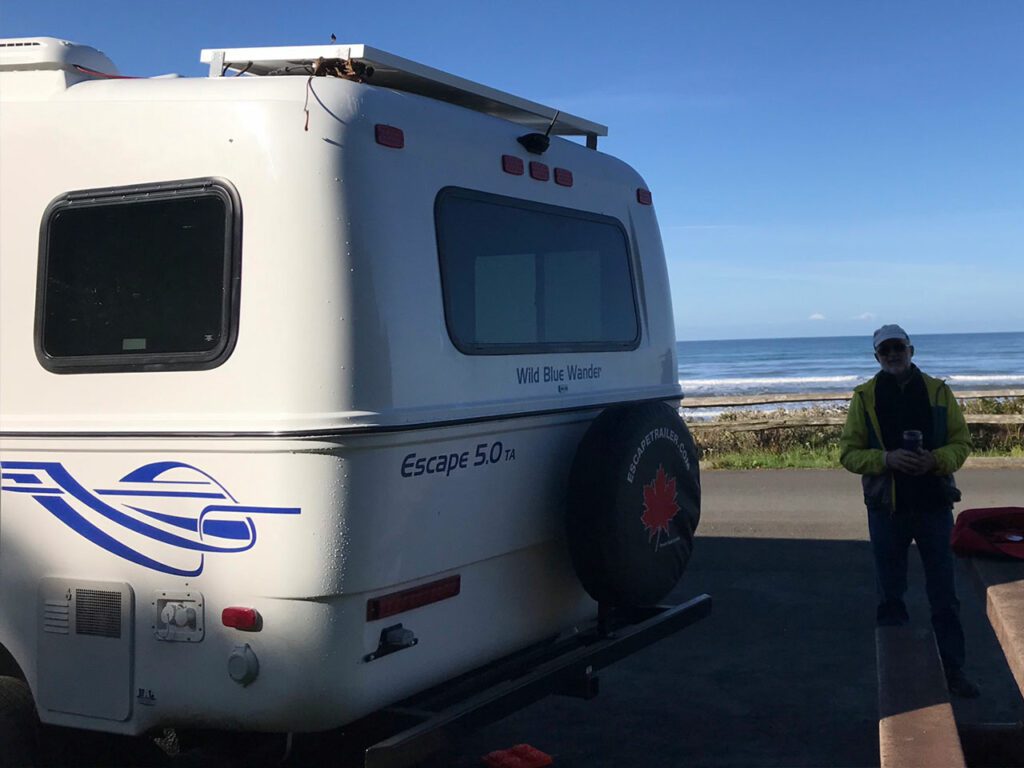 There are a couple of reasons we chose to name the trailer ‘Our Fandango’. One is because my husband loves the movie Fandango and it was a coming of age movie etched in his/our minds (lots of great quotes from this movie).  The second is the definition of Fandango: def: Informal Nonsense; tomfoolery or a foolish act (depends on the dictionary). 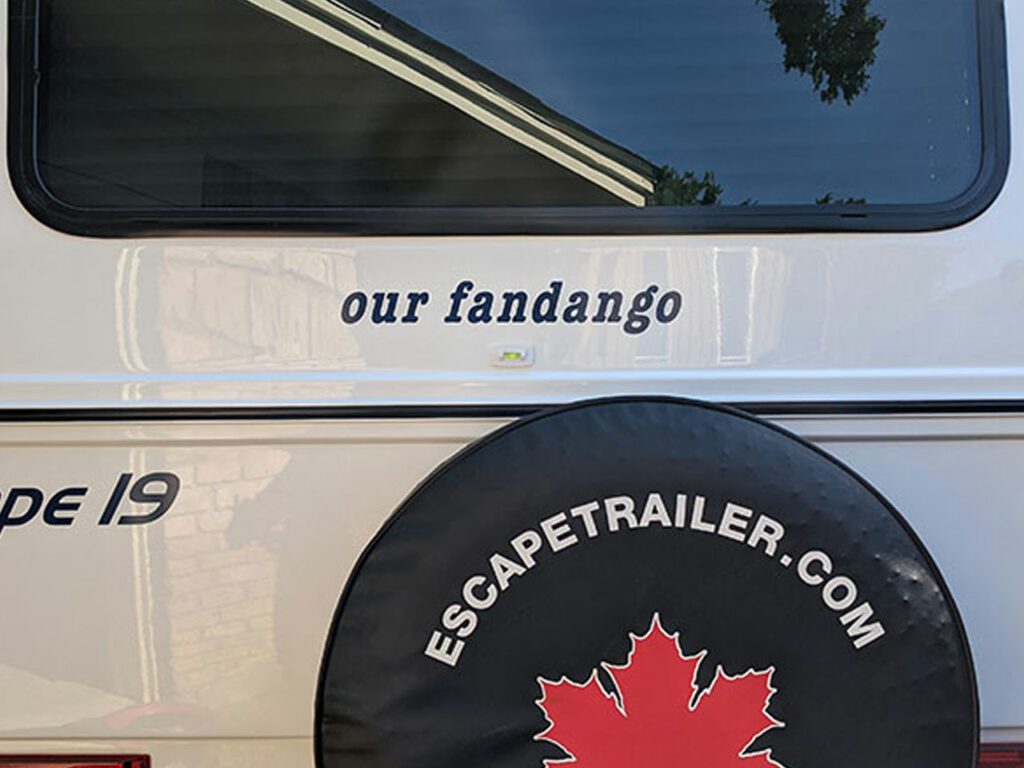 Could be political or could refer to the blue pinstriping.

My wife named our truck Henry and since Eleanor of Aquitaine was King Henry’s of France’s wife it just seemed right that they stay together.

Definition of sally: an excursion or trip, usually off the main course. To “sally forth” is also common usage. So the name Sally is a good descriptor for our wanderings.

It’s our traveling home away from home.

As for our love of bears, we choose spirit bear (know as Kemode). They are located in the north coast regions of British Columbia. Since escape trailer are made in BC, we thought it would be fitting. We haven’t gotten the lettering as of this email so no pictures as of now.

Download the Ultimate RV Living Trip Planner and stay up to date with our newsletters!

Get the Ultimate RV Living Trip Planner and Subscribe to our Newsletter!